Re-enacting the British light infantry of the American Revolutionary War is an exciting and dynamic activity. This page is about what the light infantry is, and what you'll need to get — remember we have plenty of loaner kit to get started, so don't worry about getting every expensive item straight away!

A brief history of the 40th Regiment in America

After arriving in Boston in 1775, the 40th Regiment of Foot participated in the invasion of Long Island and, as part of General Howe's army, fought in the Philadelphia campaign of 1777-1778. Both Battalion and Light Infantry companies fought in Pennsylvania at the Battles of Brandywine, Paoli, Germantown, and Monmouth, New Jersey. The 40th was reassigned to the West Indies in 1778 but returned, much depleted by disease, to North America to participate in the British raid of New London, Connecticut in 1781, including the bloody assault on Fort Griswold.

The light company for its part was detached into the 2nd Battalion of Light Infantry along with companies from about a dozen other regiments. The light battalions duties were ahead of the army as scouts, or to cover the flanks on the march. They were responsible for outpost watch, and reconnaissance, duties that had to be performed even after the rest of the army had gone into winter quarters. As Sergeant Thomas Sullivan of the 2nd Battalion of Light Infantry put it, the light infantry’s post was “in the front going out, and the rear coming home.”

The 2nd Battalion was perhaps most famous — or infamous — for the Battle of Paoli. At 10pm on the 20th September 1777, Major General Charles 'no flint' Grey's Light Infantry Battalion (drawn from 13 regiments, including the 40th) launched a surprise attack on Wayne's Division near the Paoli Tavern, Pennsylvania.

The Americans were caught completely unaware, and a furious melee broke out. The battalion was ordered to approach without flints, with bayonets only to prevent accidentally alerting the enemy. Approaching through woods, the British surprise was so complete that they routed the entire division, and running headlong into Smallwood's force to the northwest, drove them off too.

It would become known in the colonies as the Paoli Massacre, though it was no less horrifying to the men involved on the British side.

"[General Grey] came to the head of the battalion and cried out "Dash on, light infantry!" and, without saying a word, the whole battalion dashed into the wood, and guided by the straggling fire of the picket, that was followed close up, we entered the camp and gave such a cheer as made the wood echo. The enemy were completely surprised; some with arms, others without, running in all directions in the greatest confusion. The light infantry bayoneted every man they came up with. The camp was immediately set on fire, and this, with the cries of the wounded formed altogether one of the most dreadful scene I ever beheld. Every man that fired was instantly put to death."

The painting below, by Italian artist Xavier Della Gatta in 1782 was likely commissioned by Lt. Richard St. George, also of the 52nd Light Company and present at the battle.

Front and centre in the painting is Captain William Wolfe, the Irish commander of the 40th Regiment’s light company who died leading his troops at Paoli. One of the few British men killed during the battle, he was remembered as “a most brave and attentive officer.”

In 1772, regiments on the Irish establishment were ordered to practice the ‘discipline of the light infantry.’ Much of this drill would become common across all regiments serving in the wild and wooded Americas.

Among the goals of the movements and evolutions was to be quickly form fronts without the long and tedious ‘wheeling’ of close order battalions. One part of this is how a soldier carries his arms: usually a soldier would advance with his ‘firelock’ [musket] at the shoulder or recover position. Neither are stable for swift movement. In the Light Infantry Discipline, soldiers were told carry them by their side in a 'diagonal position’ that is called 'trail arms’ in later exercise manuals.

All the evolutions – the facing and forming of fronts with which to fire upon an enemy - are done by file rather than rank. That is, the front man and the man directly behind him when drawn up in two ranks. The file partners have ‘an entire dependence upon itself’ and would run to position rather than forming neat lines shoulder-to-shoulder with others in the ranks.

They were taught to use cover as file pairs, firing from the right of a tree, but they’d make use of large stones, fences - anything. In Townshend’s orders, file pairs ‘are never to be unloaded at the same time’ and is ‘by no means to discharge his firelock until the other has loaded.’ This would mean alternate fire while the partner readies for the ‘mutual defence’ of the file. Of course if they were being rushed they might need to fire before retreating...

Amongst other things, Light Infantry practiced firing at marks, made their own cartridges, and had significant training in building field fortification like abatis (felled trees in front of a ditch) and creneaus (battlements) in houses and other buildings.

Whereas Townshend's instructions were mainly about how a company of light infantry might be expected to perform together, Howe's drill concentrated on how to manoeuvre a number of companies in a composite light infantry battalion.

In practice, it wasn't especially different to the 'heavy infantry' exercise of 1764. It constituted a section on moving a battalion in broken country in two ranks at open file intervals, and a platoon exercise to take into account the '2-deep' formation.

Howe specified three different interval “orders” - that is the gap between files in a given rank. He chose “order” (two feet), “open order” (four feet), and “extended order” (ten feet) as the intervals for Light Infantry.

The most impactful part of Howe's drill was quickly changing formations or facings, with troops forming by files instead of marching or wheeling by ranks. No particular cadence of marching was prescribed: the regular troops had 'ordinary time' at 75 paces per minute and 'quick time' at 120. Howe's drill simply has 'slow,' 'quick,' and 'run.'

Despite this training the light infantry drill was not apparently effective at the outbreak of the war. Colonel Edward Hand of the provincial forces wrote in 1781 that at the beginning of operations British Light Infantry were "compact in their movements, regular in their marching and from habit and general instructions they appeared averse to every attempt to screen or cover themselves from danger." General Sir Henry Clinton like wise wrote "Perhaps in all America there is not a worse spot than this we are in for a regular army without light troops [...] I cannot call our light companies such, nor would you if I were to converse with you for five minutes.”

But, by the time of the Long island invasion in August 1776, the Light Infantry were effective, particularly with bayonets fixed! There is some evidence that Major Thomas Musgrave oversaw some specialist "bushfighting" training during the Army's sojourn at Halifax, which may account for the significant improvement in results.

This engaging, fast and exciting exercise is one of the reasons we chose to portray the Light Infantry – far from being red-coated automatons that marched in perfect lines to deliver volleys at the enemy, the British army was a maneuverable, tactically adaptable force.

What you need to get

Click on the hotspots to see the different items and the suppliers we use. Some items can be bought off the peg but most will be made to order. Please contact Alan regarding purchasing. 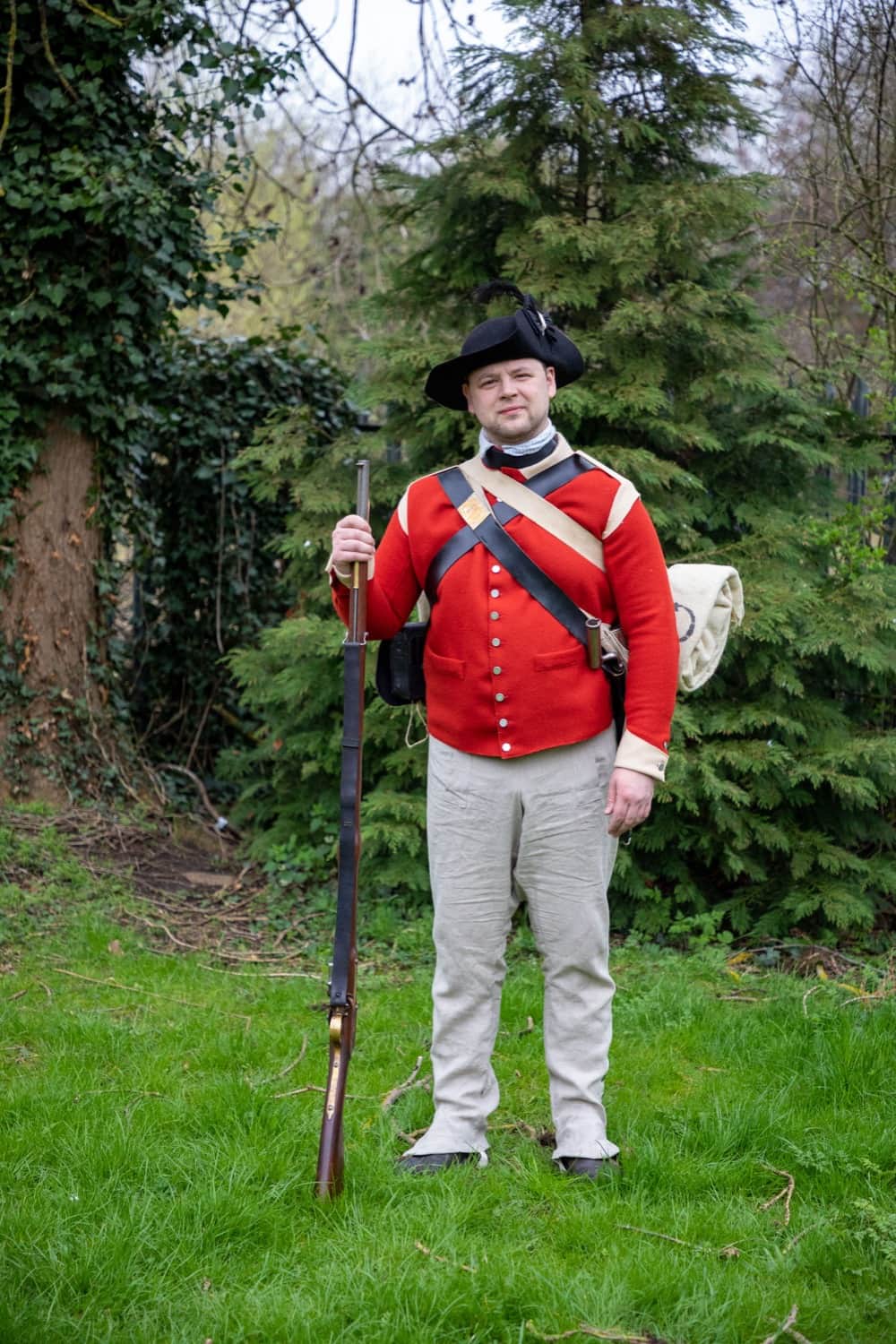 With 'Dublin Castle' stamp on the lock. 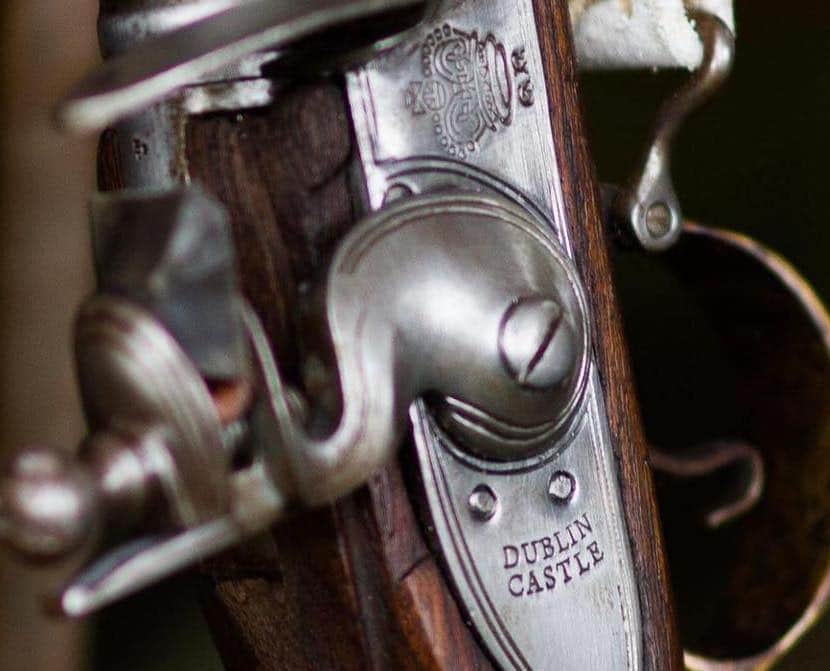 A check shirt, or plain shirt with ruffle.

A Brass Belt clasp with '40' engraved on it.

Red with Buff facings, lined, with Regimental buttons. Alan has a pattern. 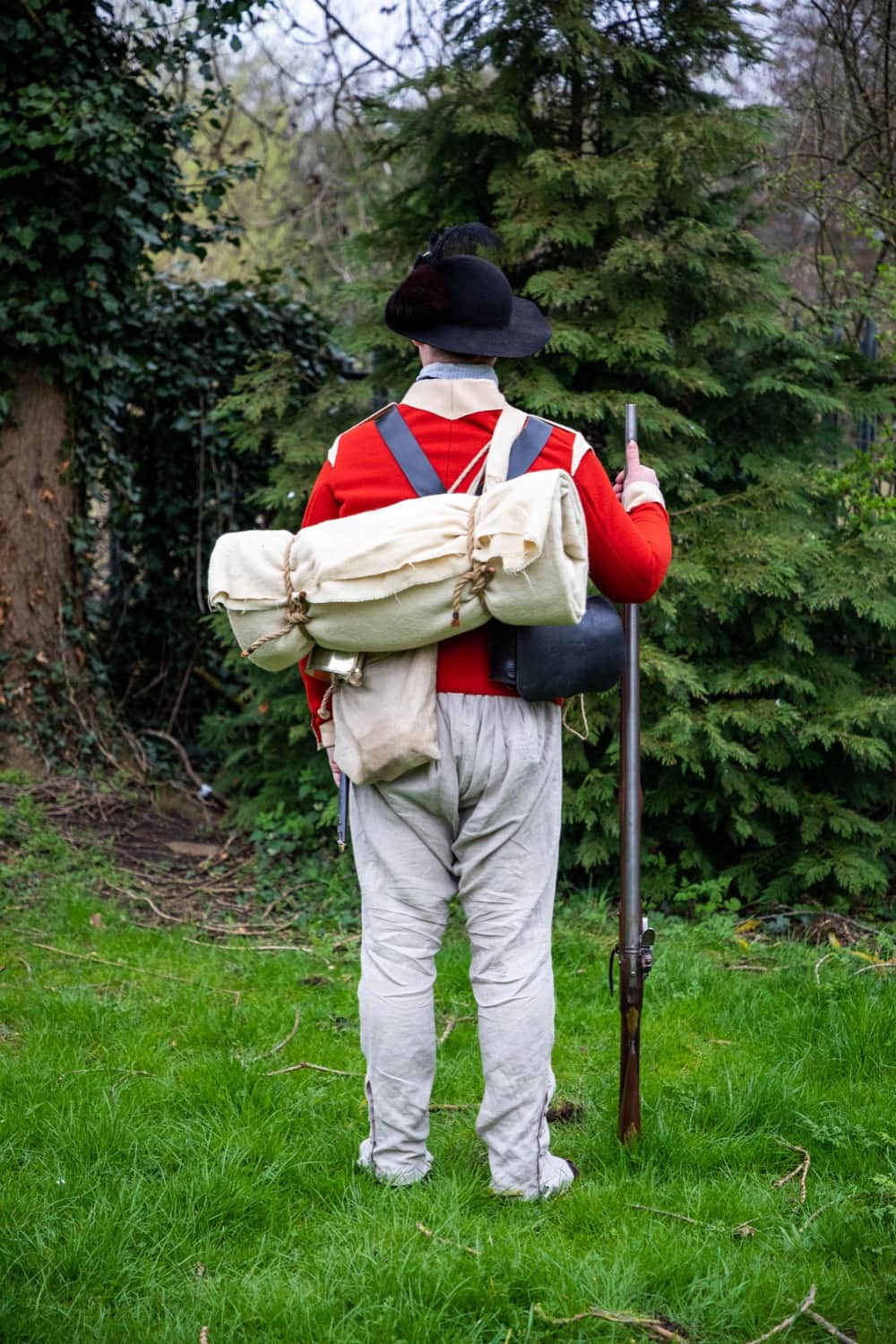 Price: £?
Suppliers:
The wallet can be made for about £10 worth of Linen - it's a very simple beginners pattern.
We are looking at a supplier for blankets. Ee have a 'GR' stamp.

Made of linen, buttons optional

Price: £10
Suppliers:
Make it yourself! It's a good beginner project.
Buttons from Dagr Castings.

We currently use a commercial 29-hole pattern made by Quartermaster Stores, but we're looking at a different pattern currently. The sling is 2" wide, veg-tan leather stained/polished black. Available from Foxblade Trading.

Redcoats & Revolutionaries uses muzzle-loading reproduction weapons loaded with 'blank' black powder cartridges. Use of these weapons requires the user to have the appropriate licenses, and appropriate storage.

It is likely that you will need a letter of recommendation, or proof of membership from our society to support your application. We will only grant one if you are an active member (have attended events etc) that is up to date with any fees.

In terms of off the peg items, to maintain uniformity, you must use the suppliers listed. For other items, we can supply the patterns for reputable craftspersons to use, and the same goes for items you'd like to make yourself.

The above uniform is the minimum necessary for a good impression of a Light Infantryman of the 40th Regiment. But there are other items you may like to get (not exhaustive):

About the British Army in America

About the American Revolutionary War